Acacia Flooring - The Modern Choice for a Rustic Look

Contradictory, you say, the modern/rustic coupling? Pish-tosh; true tastemakers break all the rules, and that's what we do here at FF every day when it comes to tracking down new, gorgeous looks for homes, offices, palaces, lairs, and what-have-you. Acacia flooring has become incredibly popular as a dynamic rustic floor, both in smooth and handscraped varieties. There are a million things to like about this wood, which is why keeping it in stock is always a bit of a challenge, so here are just a few: First of all, it's got striking coloring, ranging from rich, dark browns to light russets, all intermingled in dramatic streaks and radiating waves. Take a look: 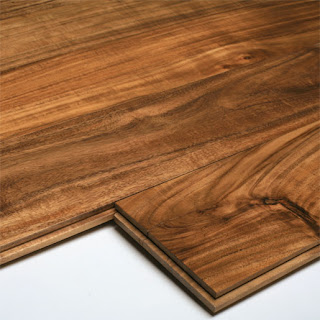 Our Acacia hardwood flooring is also available in a variety of stains. The bronze blend stain amps up the golden browns and yellows of the wood, while the fruitwood stain tones it down to a rich red-brown.
Oh, and did we mention Acacia was the wood they used for the Ark of the Covenant? Just thought we'd throw that in there. That's right: Who else can name drop GOD when it comes to how awesome their products are? Count it.
This is a wood that is very well worth checking out, not only because of its dramatic beauty and rustic good looks, but also for the affordable price, starting at just $4.99/sf!
Prices like that are why being an e-tailer is nice: You don't have to feel bad about people getting violent outside your locked store front right before a big sale. So play nice out there in cyberspace, but do what you have to to come see our Acacia! We've got samples available for order, too!
Posted by Nathalie Lindsay at 10:18 AM 3 comments: 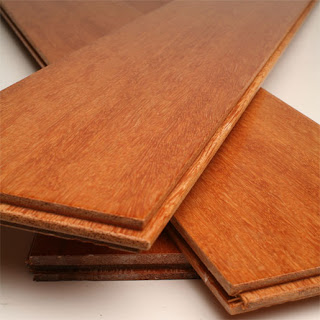 I think part of the fun of running a blog that has to do with your field is being able to introduce new and interesting products to readers who might not otherwise have been aware they even existed. Today, I want to highlight a favorite of mine, a yellowish-orange wood that is native to Malaysia, the Philippines, Papua New Guinea and Indonesia called Kempas.

Kempas hardwood flooring brings a lot to the table in terms of being an all around great hardwood choice. First of all, its gorgeous. Don't take my word for it, take a look at the photo: You won't find many domestic species that feature such striking color and distinctive graining. That vertical strand-like grain combined with the light coloring of Kempas help any room to appear brighter, warmer, and expansive.

Kempas goes great with any light colored decorum, particularly those that choose yellowish accents along with browns. It's also fairly hard, coming in at 1,700lbs on the Janka Hardness scale, a little over 300lbs higher than Red Oak, which is often used as the standard "average hardness" species.

Even More Beautiful Years After Installation.

Brazilian Cherry Flooring, like many other exotic flooring species from South America, is known to be photosensitive and to darken with age. Many consumers find the prospect of a floor changing color somewhat disconcerting. Often, homeowners are attempting to incorporate the coloring of their Brazilian Cherry Floors into the overall color scheme of their home, so the prospect of a shift in pigment makes them uneasy.

However, unlike many other hardwoods, Brazilian Cherry resists damage during these years of service when it is darkening, so it does not show damage like some other less photosensitive but also less hard woods, such as Maple or Oak. Additionally, Brazilian Cherry ages to a darker, richer red-brown after installation, which has its own unique beauty to lend to any color scheme.

For the particular homeowner, it would probably be wise to consider color coordinating their home with tones that are present in aged Brazilian Cherry rather than the immediate colors they see on fresh samples. This way, the color scheme's continuity will be much more consistent over a longer period of time. Or, should the homeowner prefer a more perennial approach, decorum could be shifted along with the shifting tones of the Brazilian Cherry flooring itself.

Apart from photosensitivity, Brazilian Cherry is a particularly stable exotic hardwood flooring specie. Movement (expansion and contraction) in service is minimal in comparison to other more dimensionally dynamic species. As a result, homeowners don't have to worry about Brazilian Cherry cupping, gapping, or bowing.

Photosensitivity need not be the terror that some perceive it to be. Brazilian Cherry will not suddenly turn chartreuse all of the sudden, it simply requires a bit of foresight with regard to color coordinating with the tones it will eventually achieve.
Posted by Christian George F. Acevedo at 7:16 AM 1 comment: 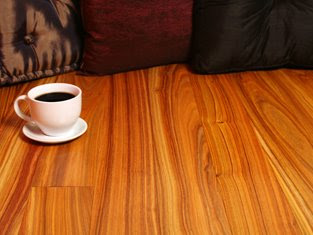 Unusual, Beautiful, Striking and NOT the floor that your neighbor will have! That is the beautiful Tarara Amarilla also known as Canary Wood.

This extraordinary species is colorful, exotic and definitely makes the statement – WOW! Found in the forests of Brazil and Bolivia this wood is not your typical brown or red. With colors that are different from most woods this specie offers bright yellows and oranges with long distinctive streaks of purple, red and black. Its grain is irregular and interlocked, and has a lustrous surface with a medium and uniform texture.

Without a doubt this affluent species of hardwood flooring proclaims vibrancy and richness. Canary wood needs no stains or distressing to make it stand out in a crowd, it is perfect as a natural prefinished floor. Solid prefinished flooring is ideal because it is easy to install AND can refinished several times to last generations.

Canary wood, like most of its exotic cousins is also extremely durable, making it a perfect solid hardwood floor for the active household. Stand out, be different, be BOLD… ChooseTarara Amarilla for your hardwood floor! 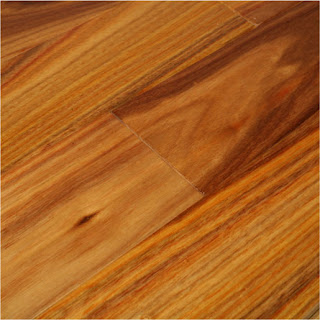 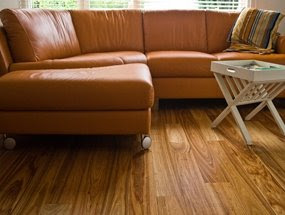 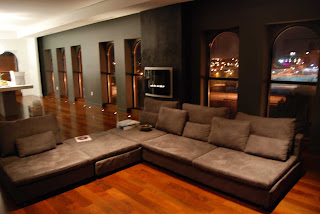 In recent years the North American market has seen an increase in exotic imported flooring. As opposed to traditional domestic species such as oak and maple, home owners prefer imported woods because they are much harder and offer a more diverse grain and color pallet.

In the flooring industry, no other wood beats Brazilian walnut flooring in terms of outright hardness. With an unmatched 3680 Janka rating, Brazilian walnut, also known as Ipe, is famous for its durability. The perfect high traffic floor. In fact it has a long history of use in the industrial world as the ideal product for railway ties and heavy truck bedding for just this reason. Most daily traffic would have a hard time leaving a scratch on this floor, making it the perfect choice for homes with large dogs or rough kids. Whether you choose Ipe prefinished floors or Ipe unfinished flooring you cannot go wrong.

Its dark brown, chocolate color is breathtaking and is certain to provide any ambience with a wonderful warm, rich feeling. Ipe offers a wide range of tones, combining dark reds, yellowish tans, browns, and nearly black hues. Like most hardwoods, Ipe will darken over time to a smooth medium to dark brown color. Graining varies greatly, adding a dash of character to your floors. All of these characteristics combined have made Ipe flooring one of the top selling imported species for flooring in North America.

This species of prefinished hardwood flooring is the perfect choice for the DIY homeowner with kids and dogs. The aluminum oxide factory finish makes this incredibly durable species even more indestructible. Ipe hardwood even has a Class A fire rating, it occupies the same class of fire-retardant materials as steel. For durability, safety, and beauty, Ipe prefinished floors make an excellent choice. 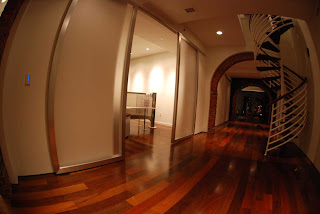 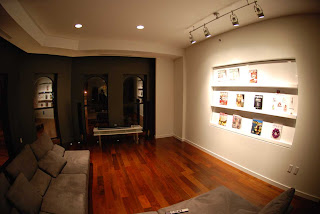 CRAZY Week!! Holiday is OVER!

You know that old saying "be careful what you wish for"? So very true! I've envisioned this dream of a successful business on a national level for so long and now that it is a reality--- HOLD ON! It's all good though-- Actually GREAT! The new web site is really taking off! It's just Friday and I'm exhausted... reminds me of another saying "Thank GOD it's Friday"!!

Accomplished a lot this week! FINALLY got the copy written for the wholesale trade discount program. I'm really excited about this. We offer GREAT discounts that really will help the little guy who owns a small show room, or the installer who has to travel a distance to get to his closest distributor. We've come up with incentive programs too that will help and drive business back to the customer! I really see this program taking off a win / win situation for everyone.

We also put the new laminate line of products on the site. This is a great alternative to hardwood floors and a great price point!

Site continues get over 100 hits a day! Really excited about the prospect! ONLY IN AMERICA!
Posted by Nathalie Lindsay at 5:22 PM No comments:

Was there a home improvement project that went undone in 2008? Tackle 2009 with a new Fantastic Floor. But which to choose imported or domestic? Prefinished or Unfinished?? So many choices and educating yourself about the wood floor industry has a steep learning curve. What grade to choose? Which width appeals to you and is functional for your climate? So many questions.

If the lines are something that don't appeal to you, then unfinished is recommended. This mandates site sanding and finishing for a flat smooth floor. Installation costs are generally a little more for an unfinished floor, however the materials are less expensive than the prefinished alternative.

Either way you choose a prefinished or an unfinished wood floor is a FANTASTIC way to start the New Year!
Posted by Nathalie Lindsay at 10:49 AM No comments: